The use of drones, a.k.a. unmanned aerial vehicles (UAVs) as a flying radio access network (RAN) is currently gaining significant attention. It holds promises as a complement to classical fixed infrastructure by allowing ultra flexible deployments, with use cases ranging from disaster recovery scenarios to improving the performance and coverage of the network. Beyond obvious challenges within regulatory, control, navigation, and operational domains, the deployment of autonomous flying-RANs also come with a number of exciting new research problems such as the issue of autonomous real-time placement of the drones in non-trivial propagation scenarios (i.e. scenarios where the optimal placement is not just dictated by a trivial geometry or statistical argument due to shadowing effects, e.g. in cities). We present several different approaches, lying at the cross-roads between machine learning, signal processing, and optimization. Some approaches involve the reconstruction of a city map from sampled radio measurements which can have application beyond the realm of communications. 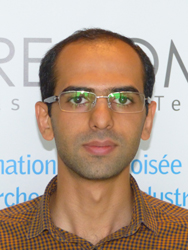 Omid Esrafilian has started his Ph.D. since 2016 in the Communication System department of EURECOM under the supervision of Professor David Gesbert.

He received both his Master’s and Bachelor’s degree in Control-Electrical Engineering from K.N.Toosi University of Technology in 2016 and 2014, respectively. He graduated as first ranked among M.Sc. students of control major in his university. The subject of His Master’s Thesis was „Simultaneous localization and mapping and autonomous flight of a Quad-Rotor robot using a monocular camera“.

From 2012 to 2016, he worked as a research assistant and head of Quad-Rotor robotic team at the Advanced Robotics and Automated Systems lab (ARAS), K.N.Toosi University of Technology in Iran. During this period, he participated in some robotic competitions and won some prizes.

From 2014 to 2015, he was an assistant professor at Instrumentation Laboratory, K.N.Toosi University of Technology in Iran.

His research interest is robotic (UAVs) and communication and since the beginning of his PhD he published some publications on the topic of UAV-aided Radio Access Networks. Moreover, he was involved in the PERFUM’s first demo of the autonomous cellular flying relays.